Fundamental analysis and technical analysis, the major schools of thought when it comes to approaching the markets, are at opposite ends of the spectrum. Both methods are used for researching and forecasting future trends in stock prices, and, like any investment strategy or philosophy, both have their advocates and adversaries.
To much information to check in few time and from several resources
Psychology effect on financial decision coming from traditional media and social network. These emotional can trigger irrational decision-making that costs investors money
Works on seasonality basis, increases winning probability, enables to predict increase or decline of price

The goal of the post is to stimulate everyone’s participation in commodity trading.
In particular, the idea is to create a section dedicated to Commodity Trading with the aim of collecting all the information necessary to trade commodities on a single page per commodity. Fundamental data, futures prices, exports, exchange rates, the main government reports USDA, Wasde, weather forecast, social sentiment.
All on one single page, commodity trading dashboard, click here

Deep Learning
Until recently, humans programmed all software. Deep learning, a
form of artificial intelligence (AI), uses data to write software. By
“automating” the creation of software, deep learning could
turbocharge every industry.

The Re-Invention of the Data Center
In the data center, we believe accelerators, dominated by GPUs, will
become the dominant processors for new workloads, growing 21% at
an annual rate to $41 billion by 2030.

Virtual Worlds
Today, virtual worlds are independent from each other, but in the
future they could become interoperable, culminating in what
futurists have deemed ‘The Metaverse.’

Bitcoin’s Fundamentals
Based on search volumes compared to 2017, bitcoin’s price increase
seems to be driven less by hype. With bitcoin appearing to gain
more trust, some companies are considering it as cash on their
balance sheets.

Electric Vehicles (EVs)
We believe the biggest downside risk to our forecast is whether
traditional automakers can transition successfully to electric and
autonomous vehicles.

Automation
Automation has the potential to shift unpaid labor to paid labor.
For example, as food services automate, they will transform food
prep, cleanup, and grocery shopping into market activities including
food delivery.

Autonomous Ride-Hailing
We believe autonomous ride-hailing will reduce the cost of mobility
to one tenth the average cost of a taxi today, spurring widespread
adoption.

Orbital Aerospace
Thanks to advancements in deep learning, mobile connectivity,
sensors, 3D printing, and robotics, costs that have been
ballooning for decades are beginning to decline. As a result,
the number of satellite launches and rocket landings is
proliferating.

3D Printing
3D printing collapses the time between design and production,
shifts power to designers, and reduces supply chain
complexity, at a fraction of the cost of traditional manufacturing.

Long-Read Sequencing
Next-generation DNA sequencing (NGS) is the driving force behind
the genomic revolution. Though historically dominated by shortread sequencing, we believe long-read sequencing will gain share at a rapid rate.

Cell and Gene Therapy: Generation 2
The second generation of cell and gene therapies should shift from:
• liquid to solid tumors
• autologous to allogeneic cell therapy1
• ex vivo to in vivo gene editing

Which Company Uses the Most of Your Data?

Big brother brands report: which companies track our personal data the most? 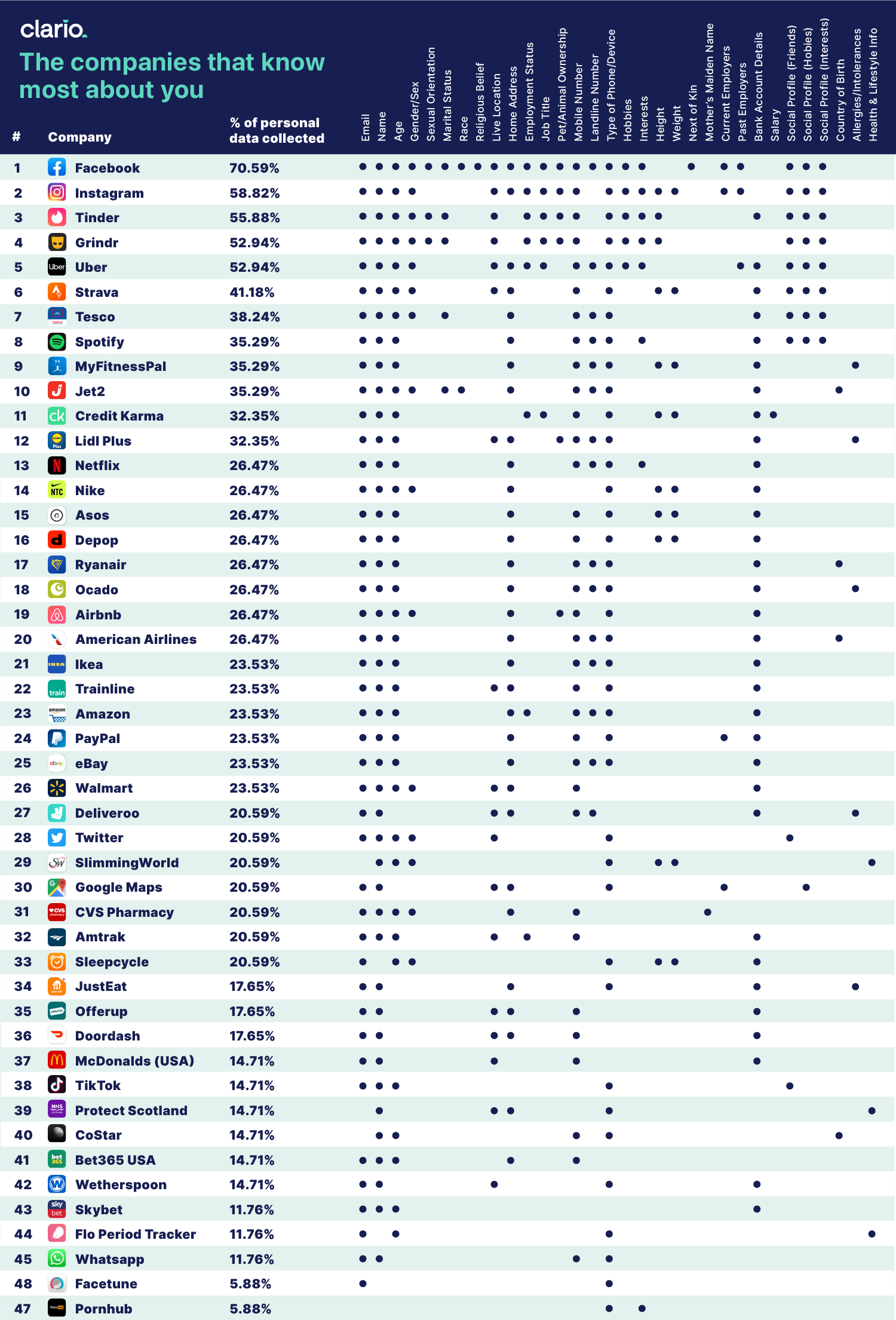 Ranked: The 50 Most Innovative Companies 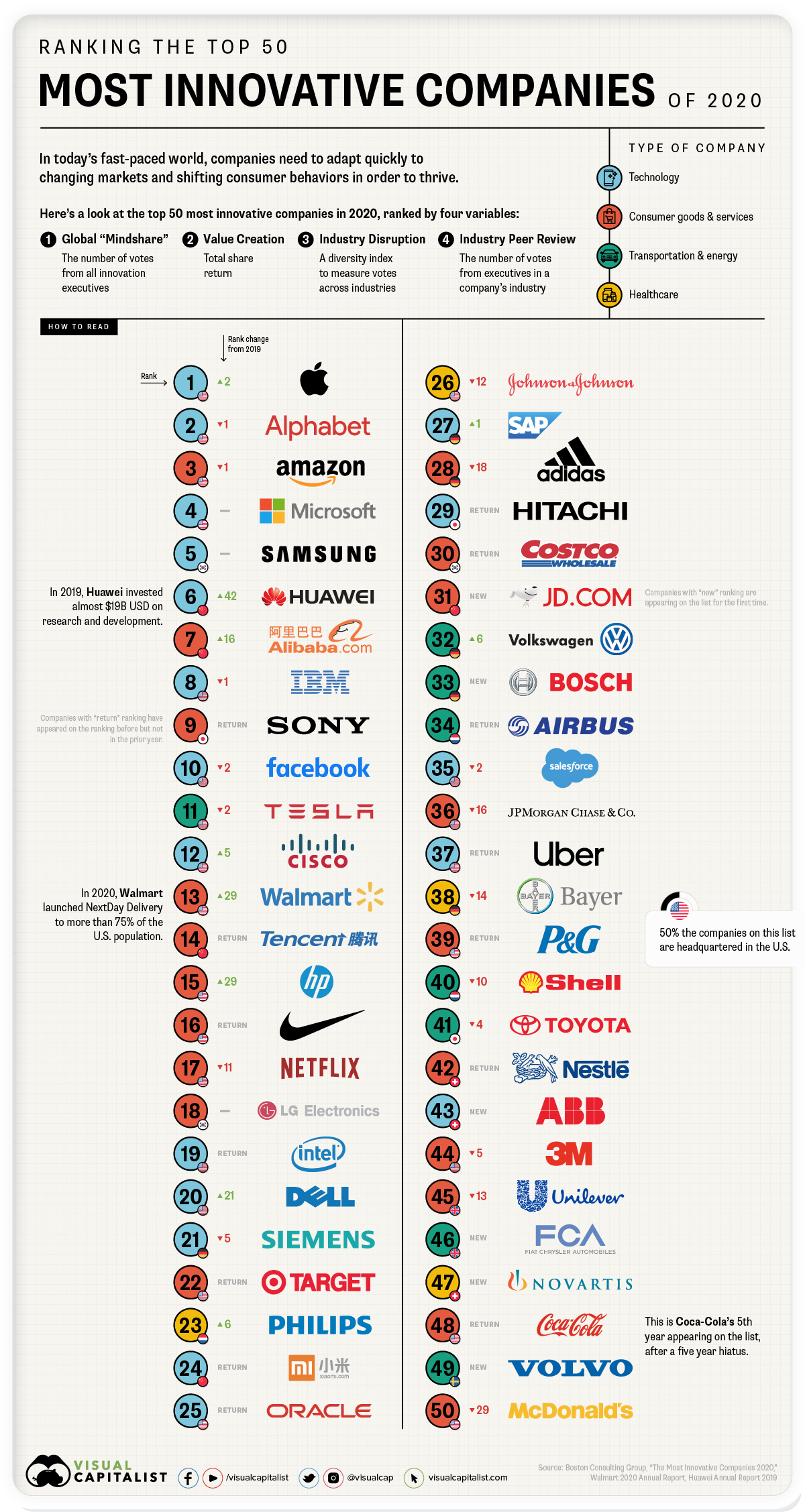 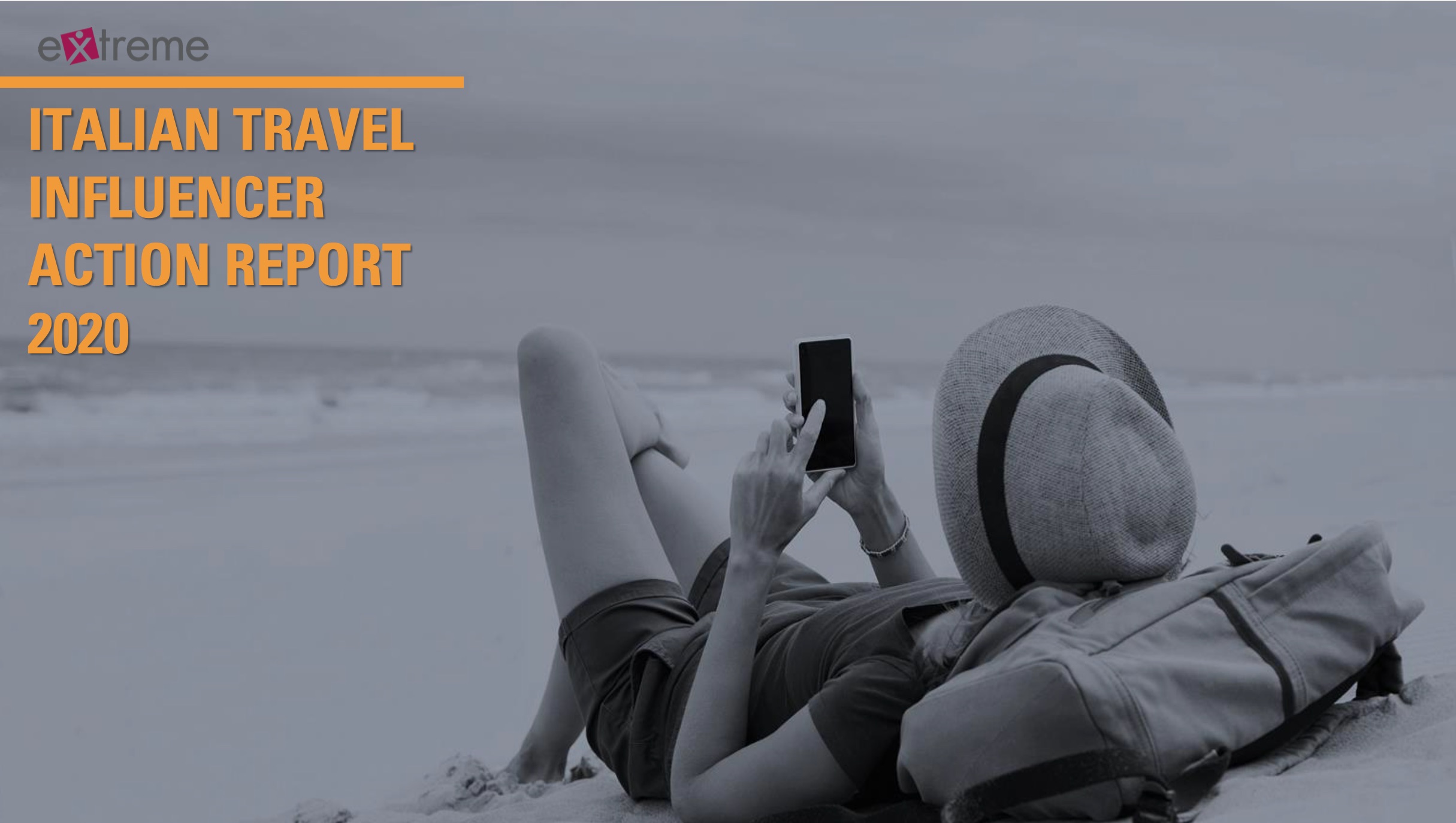 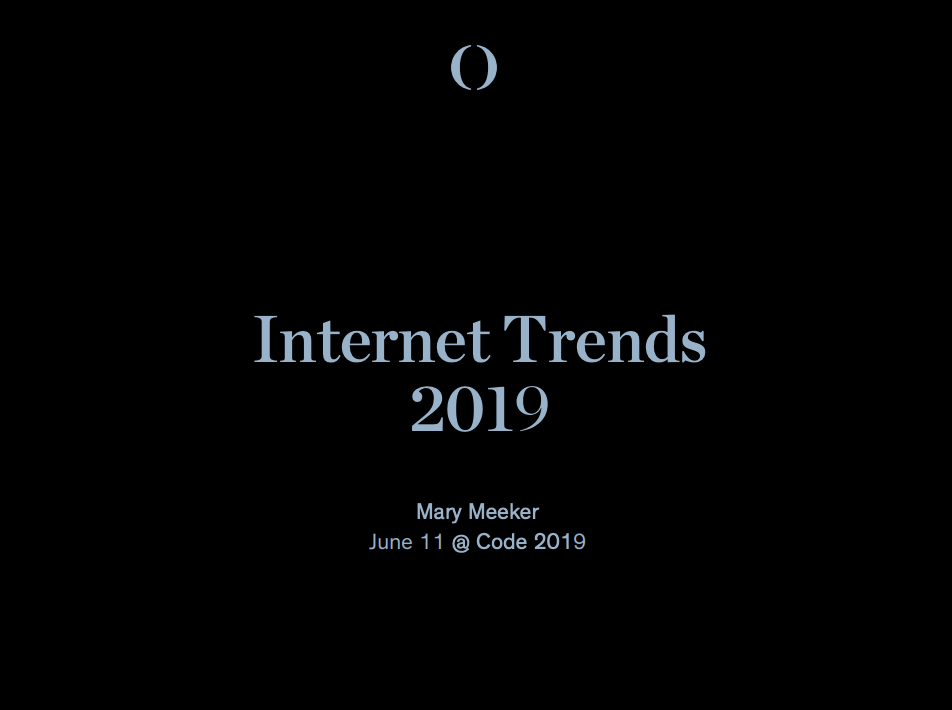 We believe that AI will be a force multiplier on technological progress in our increasingly digital, data-driven world. This is because everything around us today, ranging from culture to consumer products, is a product of intelligence. 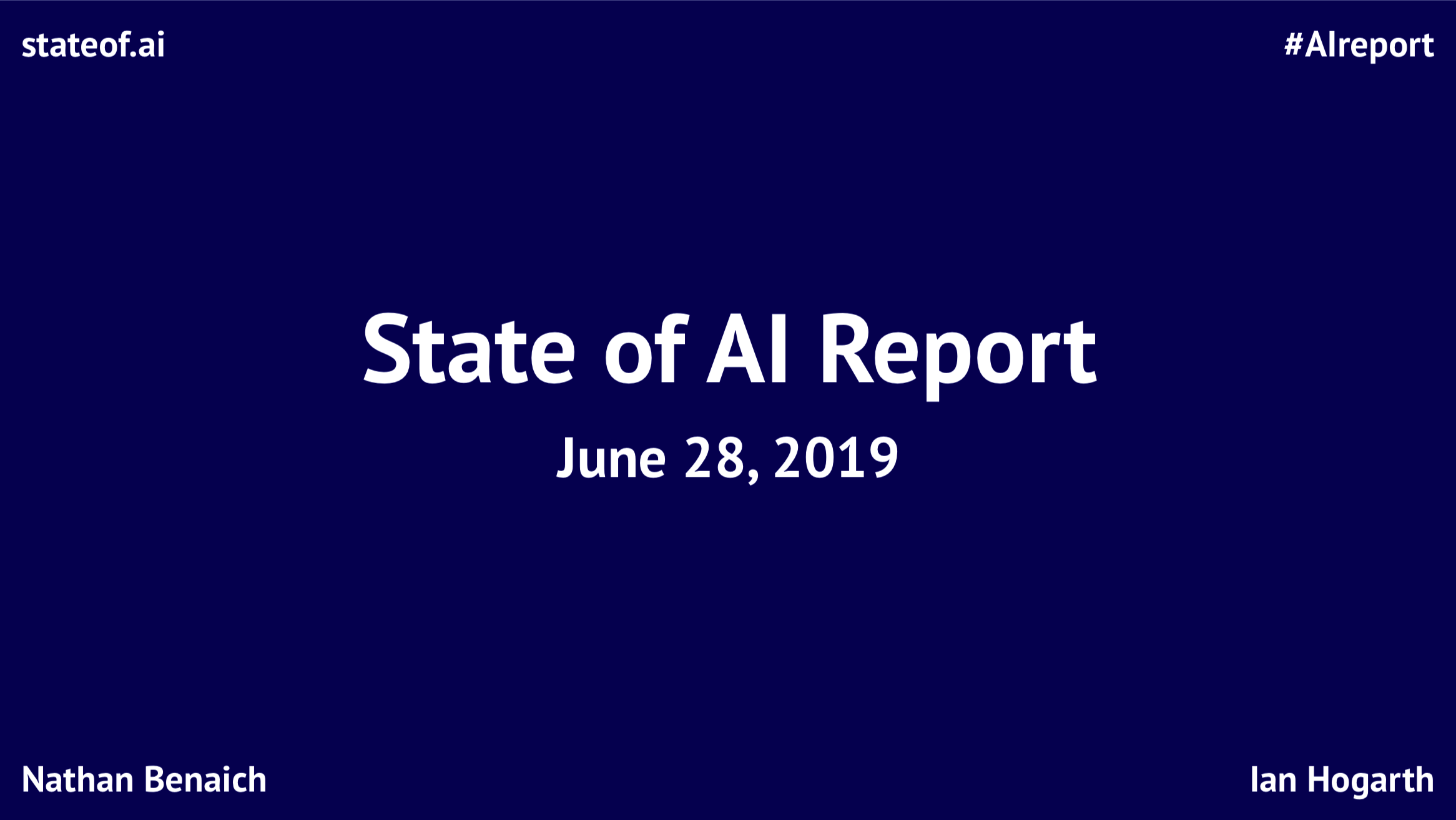 The Future Of Customer Experience 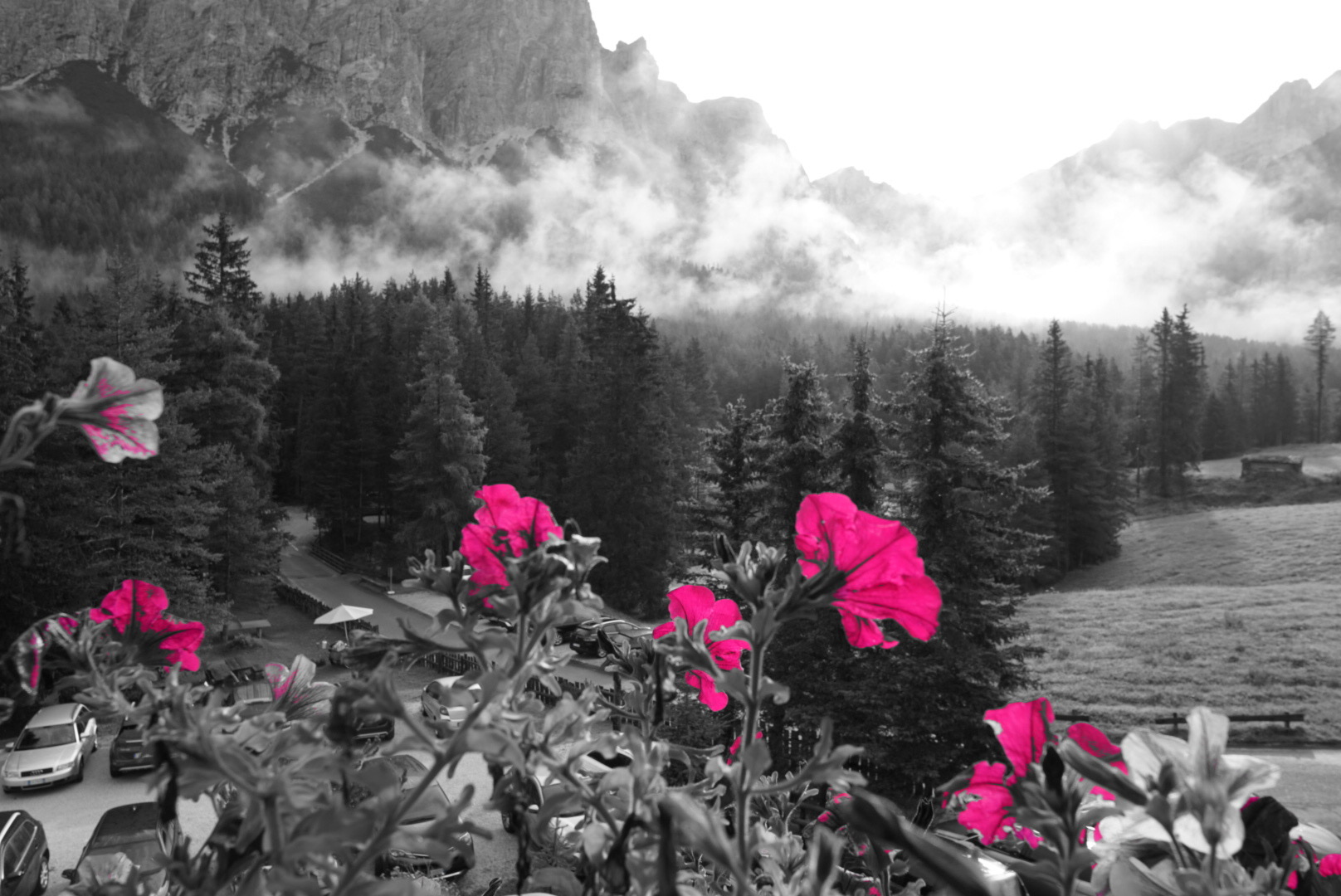 The Future of Customer Experience

Since we’re living in an age where retail chains go bust by the score, the need for an optimal client experience is clearer than ever before. Modern technology offers many opportunities to enrich the experience even further, particularly since it’s developing at breakneck speed. What will client experience look like in, say, 4 years from now? Digital assistants everywhere, but the human touch retains its value – Siri and Cortana are samples of the digital assistants we know now: nice little smartphone tools that amuse us with hilarious conversations and the occasional surprising answer.

Nevertheless, digital assistants may have evolved considerably in the future. They’ll offer truly useful conversations and will assist us in making the right choices. Some web shops are experimenting with chatbots and wizards who try to offer real advice. By 2020, these systems may have matured and offer real and useful advice based on targeted open and closed questioning. They’ll also become a staple in mortar and brick shops. One good example of where we’re heading is Robot Pepper. This physical robot is able to initiate a conversation and assuming it’s designed to do so assist you in purchasing products suitable to your needs.

However their role will change. Robots will look after basic client care, while humans will remain indispensable for more advanced forms of advice that need a human touch. There are various samples of organizations that have subjected an excessively large part of their client care services to automation. In addition, well functioning self service facilities will become more important and will be indispensable by 2020. Including self service portals or active user communities where clients can ask their questions. Interactive shops increase shopping districts attractiveness – In 2020, mortar and brick stores will need to think even more about their relevance.

The great news is that technology offers countless opportunities to give a huge boost to the shopping experience. The only hurdle here’s creativity. That’s a good thing, because shopping should be sexy. Lets take for instance a sneaker store. The moment a client passes the store, he’ll get a personalized deal offer on his smartphone. The latest addition to his favored line of sneakers is available with 20 percent off, and in stock at this store. Once inside, he’ll explain to the digital assistant that he’s searching for a sneaker appropriate for a novice runner. When fitting the sneaker, beamers project walking exercises on the shop floor to test out some of its features. Lastly, the mirror can show him how different colours along with other varieties would look on him using augmented reality. Hyper individualization brings product and shopping experience closer to the consumer – Stores and brands will increasingly collect client data in 2020.